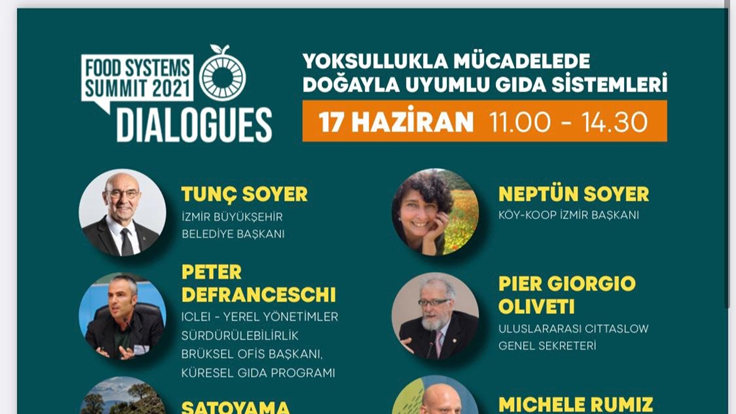 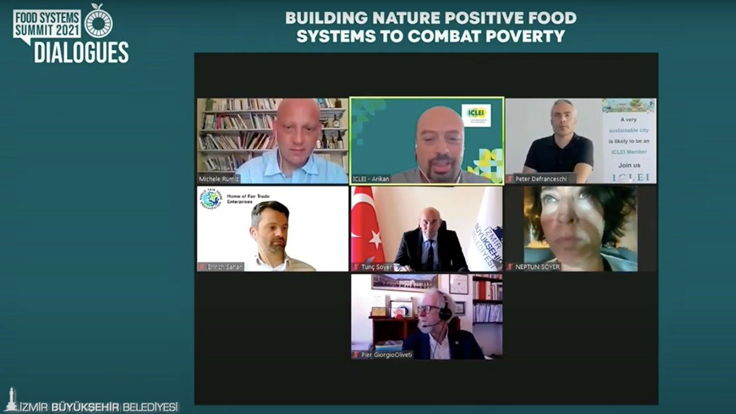 Tunç Soyer, Mayor of İzmir Metropolitan Municipality, led one of the global dialogue meetings held in order to convey the experiences of local stakeholders before the Food Systems Summit led by the Food and Agriculture Organization of the United Nations (FAO) and ICLEI (Association of Local Governments for Sustainability) in September.

Tunç Soyer, Mayor of İzmir Metropolitan Municipality, Member of the Board of Directors of ICLEI (Local Governments for Sustainability), Co-Chairman of the Climate Action and Low Emission Development Portfolio, stated, “Local producers who could not compete with global giant companies had to leave their territory and started to migrate to cities as cheap workforce. We have started to create and implement İzmir Agriculture strategy within the framework of our vision of ‘Another Agriculture is Possible’ in order to reverse this trend. Thus, we started to take decisive steps to find solutions to the problems in the agricultural industry, where approximately 1.5 million citizens live on. We implement a local policy to increase the welfare of these lands by increasing farmers' incomes and to facilitate access to healthy and sustainable food for everyone living in İzmir.”

International Cittaslow Secretary General Pier Giorgio Oliveti, on the other hand, stressed the importance of establishing a planet-friendly food system in both metropolitan and rural areas, drawing particular attention to local food production. Cittaslow Metropolitan project started a very important study in this regard both theoretically and in practice.”

Erinch Sahan, CEO of the World Fair Trade Organization, emphasized that there is a great inequality in access to food in the world and said “One in every 8 people in the world is becoming more and more desperate for food. Fair agriculture means producing under sustainable and fair conditions. The vision of fair agriculture also raises the voice of small producers. Because we see that mainstream production brings about ecological destruction.”

Neptün Soyer, President of İzmir Village-Coop Union, said that if the small producer cannot make their living where they were born, neither poverty nor drought can be fought. She added, “While spreading the seed on the ground in Anatolia, we say ‘For the wolf, for the bird, for the food'. Because the wolf and the bird have a right to share the fertility. We have to know how to share and be fair. We must produce as much as we need and take only what is rightfully ours. Of course, the key to producing in harmony with nature and reaching reliable food is the organization of small farmers. Cooperatives are the way to achieve this. Cooperatives are an important tool in the fight against poverty.”

Peter Defranceschi, Head of the Brussels Office of Local Governments for Sustainability (ICLEI) stated, “We are focusing on how food systems should function in the future. We are also trying to create solutions within the scope of food systems at the European Food Systems Summit. The five ICLEI principles for low-emission, nature-based, fair, flexible, and cyclical development are designed to create systematic change.”

Steven Schonberger, Regional Director for the World Bank Group, said “Efforts are being made to reduce greenhouse gas emissions in Turkey.  Especially healthy diet awareness needs to be created and integrated into the general system.”

“We are working with Izmir”
Michele Rumiz, International Slowfood Programme Coordinator, said that about 8-9 percent of the world's population is undernourished and stated “Worldwide producers actually produce 1.5 times the world's population. So, why is there a concept of malnutrition? This is not because food is not sufficiently produced; it is unfairly distributed and access to food is not the same for everyone. Everyone should have access to food as part of the fight against poverty.  We work for a good, clean, and fair food system and want everyone to have access to these foods at SlowFood. Accordingly, local production and local food culture should be at the centre of food systems policies. This is what İzmir Metropolitan Municipality is trying to do. Accordingly, we are working with İzmir. We will organize Terra Madre Anatolia fair with İzmir.”