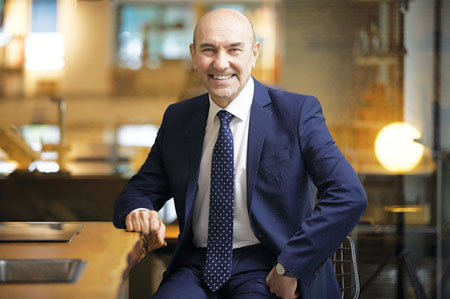 Born in Ankara in 1959, Tunç Soyer has lived in Izmir since his early childhood.

After graduating from Bornova Anatolian Highschool as a boarder, he completed his university degree at the Ankara University Faculty of Law. During this time, he worked as a correspondent in the Turkish News Agency. He has also translated a work on the tragedy of women in immigrant camps into Turkish.

Tunç Soyer has a Master's Degree on “International Relations” from Webster College in Switzerland and on the “European Union” from Dokuz Eylül University. Being a fluent English and French speaker, in 1991, he founded a holiday village in Seferihisar that is still in operation. He was an active manager in the tourism sector for nine years.

In 2003, he became a Consultant of the Mayor of Izmir Metropolitan Municipality Ahmet Piriştina on the obtainable financial resources of the European Union and has strengthened his experiences on the economy and social life of Izmir within this period. From 2004 to 2006, he served as the Director of Foreign Relations of the Izmir Chamber of Commerce. In 2006, he was appointed as the General Secretary of EXPO Izmir.

In 2009 he was elected as the Mayor of Seferihisar and carried on this task for two terms. He has implemented the international local-scale development model Cittaslow (Slow City) first to Seferihisar and then introduced it to the seven geographical areas of Turkey and the Turkish Republic of Northern Cyprus. In 2013, he was appointed the Vice President of the Cittaslow Unity centered in Italy, became the Chairman of the Board of SODEM (Social Democrat Municipalities Association) in 2014, was elected as a Board Member of United Cities and Local Governments (UCLG) in July 2019, and in October 2019 he was elected vice-chairman of the Council of Europe Congress of Local and Regional Authorities Regional Governments Assembly. Along with these duties, he has been elected as the Mayor of Izmir Metropolitan Municipality at the local elections held in March 2019. He is married and has two daughters.