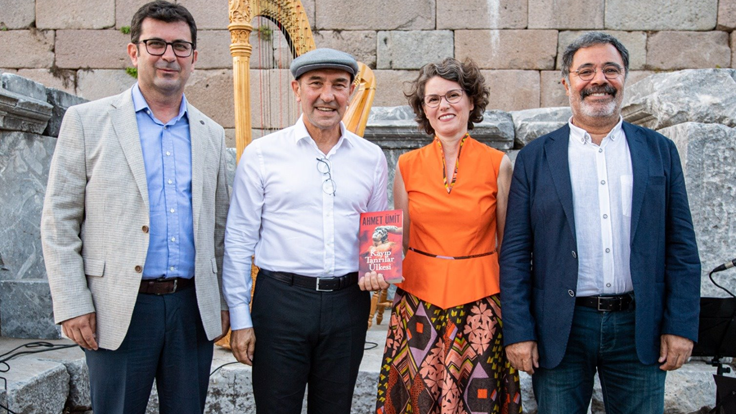 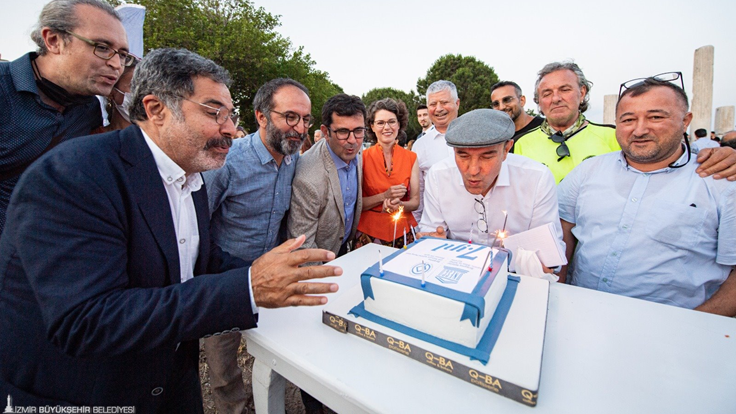 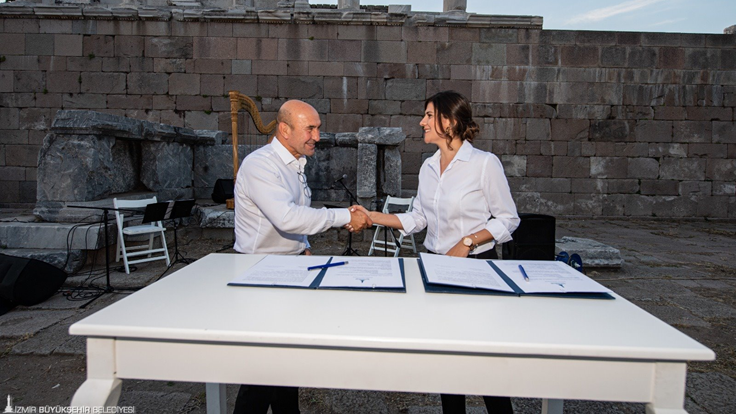 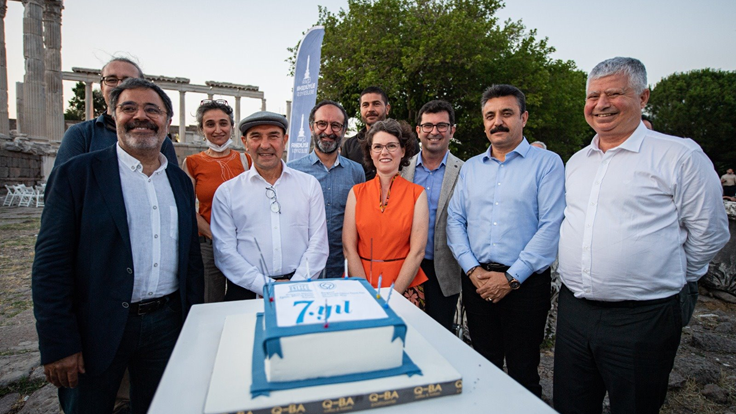 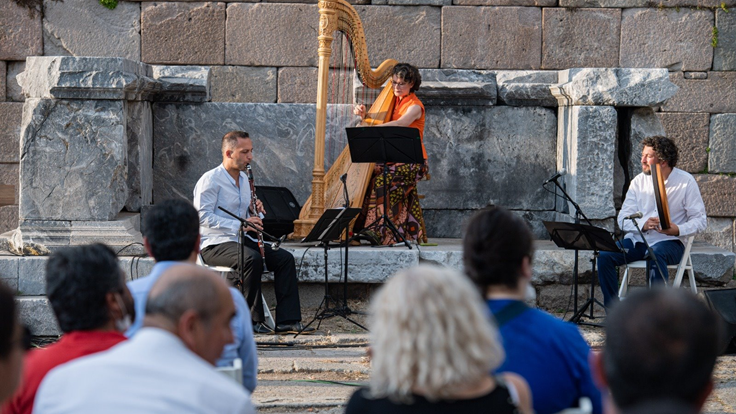 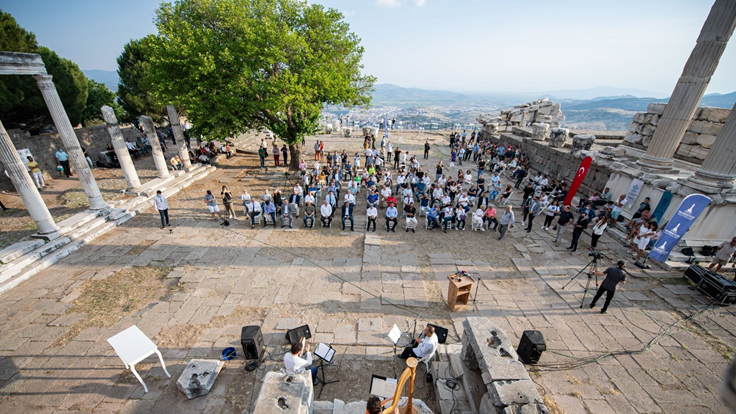 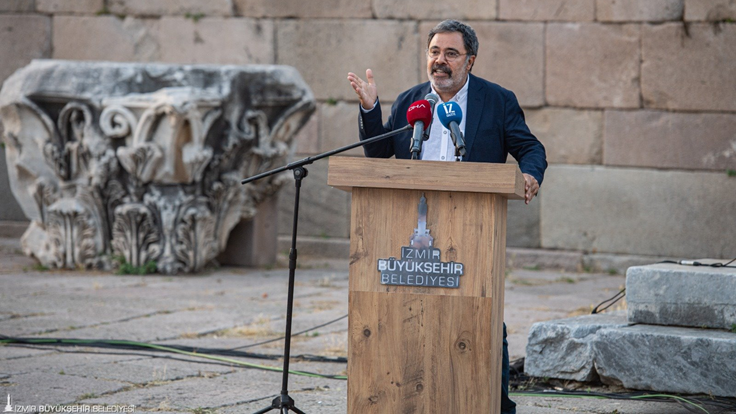 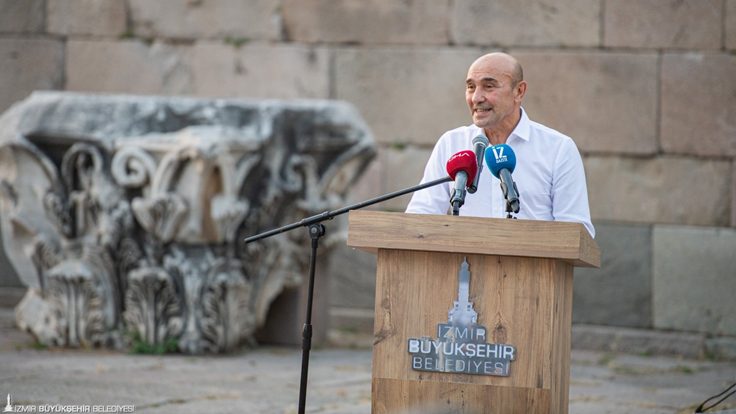 Author Ahmet Ümit’s latest book, “Kayıp Tanrılar Ülkesi”, which blends detective science with archaeology in the shadow of the Zeus Altar and Pergamon Temple, was launched in the Ancient City of Pergamon, Izmir. Soyer also signed the protocol for the production of the Pergamon Documentary.
He thanked on behalf of İzmir.

Mustafa Özuslu, The Metropolitan Municipality Deputy Mayor of İzmir, Adil Kırgöz, The Municipality Mayor of Dikili, Fatih Gürbüz, The Municipality Mayor of Foça, Mehmet Gönenç, The Old Mayor of Bergama Municipality, artists, authors, journalists, and representatives of non-governmental organizations from Bergama attended to the event in which the passages from Author Ahmet Ümit’s book were read and the harp concert by Şirin Pancaroğlu was organized. Expressing in the opening speech that he is very honoured by Ahmet Ümit’s mention of Pergamon Ancient City in his latest book, Mayor Soyer said “ Ahmet Ümit, whose books have been translated into 30 languages and aroused great interest in the world, once again revealed the value of Bergama and İzmir, which are on the UNESCO world heritage list, to the world, through describing Pergamon Ancient City in his novel, Kayıp Tanrılar Ülkesi. Therefore, I consider him as an Ambassador of İzmir and thank him on behalf of İzmir.”

Mentioning that they conduct comprehensive works so that Bergama, which has become the 999th heritage of the world by entering the UNESCO world heritage list in 2014, could have more shares in tourism much more, Mayor Soyer stated “We know that it is not possible to reach our goals for İzmir as a whole without ensuring that Bergama reaches the place it deserves in tourism.” Emphasizing that they start to take significant steps by bringing the Zeus Altar from Berlin to Bergama, İzmir, which it belongs to, Soyer told “ One of the works conducted with the aim of bringing the Zeus Altar to the lands which it belongs to is the protocol of “Pergamon Documentary” which we will sign today.  Directed and produced by Nihal Ağırbaş, The Pergamon Documentary whose script was written by Ömer Erbil will contribute to these works.”

The Pergamon Documentary aims to tell the real story of the Zeus Altar, whose parts were smuggled to Germany in the1800s.

Ahmet Ümit said “ I was very impressed by this extraordinary beauty and decided to write this novel when I came here 10 years ago. There is a great tranquillity inside me. I am in the deep tranquillity of fulfilling my duty against these magnificent lands as a world citizen.” Telling that German people took the Zeus Altar, which is the eighth wonder of the world, when they came here in the 1800s, Ümit expressed “They took it with permission. They took it with the order of Abdülhamit. There is a sale contract. What do we do today? Hasankeyf is under water. Allianoi is under water. Yet, I am a lucky citizen born in these lands. I will continue to look after this strong heritage by writing.”