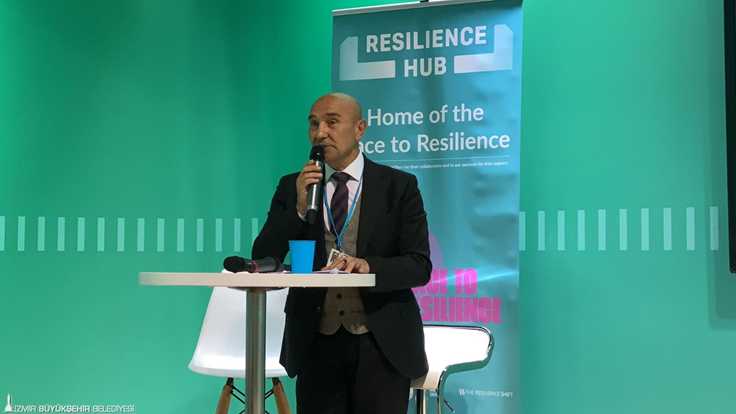 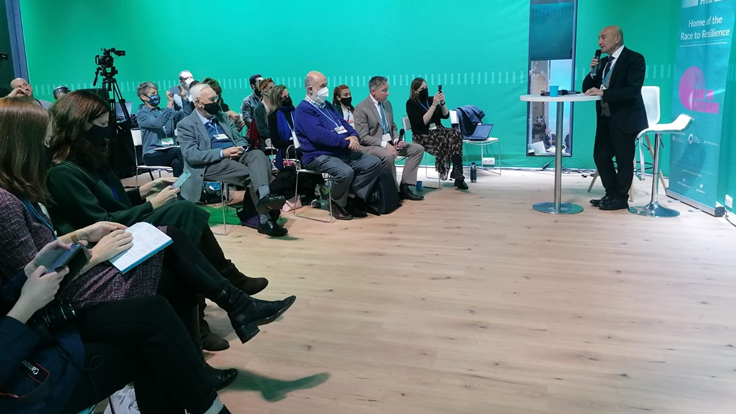 Tunç Soyer, Mayor of Izmir Metropolitan Municipality, participated in the 26th UN Climate Change Conference of Parties (COP26) held in Glasgow on October 31 and November 12, 2021 to give speeches in four sessions on behalf of Izmir and other cities around the world.

Mayor Tunç Soyer, speaking at the session heading "Culture Driving Climate Resilient Features: An Intergenerational Dialogue" held by the Union of World Municipalities (UCLG), Local Governments for Sustainability (ICLEI), said, "While the climate crisis trails the entire world into a great disaster, we, along with my colleagues from all around the world, are working to create new cities that are in harmony with nature at COP26 where I came on behalf of Izmir. Our primary goal is to make Izmir a pioneer city in harmony with nature."

Mr. Soyer will be participating in the GLOBE COP26 Legislative Summit, Scotland, in Edinburgh: "Climate Resilience and Sustainable Development on the Way Culture Creates". On the same day, he will make a speech at the Glasgow Food and Climate Declaration at the Glasgow City Council and sign the Declaration.

"Young people want to hear the voice of our conscience"
In the first session, Mayor Tunç Soyer started his speech by mentioning the Anatolian legend named Shahmaran. Mayor Soyer said, "The legend of Shahmaran tells us that if a single person loses his or her conscience, everyone will be harmed. This story that was told hundreds of years before the humanity met the climate crisis did not lose its value today." Mr. Soyer, stating that experts in Glasgow are trying to find sentences that will shape the world's future, said the following, "I see that young people want to hear words on our conscience, not our passions."

If we want to deliver the cultural change needed by our planet, then this third heading should be a key starting point of us: Harmony with each other. In other words, democracy at every moment of life, respecting the universal values of human rights. Here, our fundamental principle is to ensure equal citizenship by protecting the rights of nature and to ensure inclusion. That is why we see harmony with change as a fourth heading when describing the circular culture. To ensure that the culture is fed by the creativity of new generations and endless sources of inspiration of the nature."

A new urbanism approach
Cittaslow Metropolis Mr. Soyer, emphasizing that they incorporated the theory behind circular culture into the governance approach of Izmir city with a population of approximately four and a half million just like the circular economy and circular city, said, "We have created concrete examples of implementation. We thus described an urbanism approach accommodating all four titles that I just mentioned: Cittaslow Metropolis is a program committed to implementing the notion of circular culture led by Izmir. This approach considers cities as an ecosystem that nurtures calm and harmony, not populism and autocracy. It unites art, science, and our dreams, and reconnects them to each other within the term word. Cittaslow Metropolis is an innovative model of urban life that combines local and universal values."

ICLEI declaration
Mr. Soyer, stating that the role of cultural transformation in combating the climate crisis is emphasized in the COP26 declaration of ICLEI (Local Governments for Sustainability), of which he is a board member, said the following, "The circular culture concept and the Cittaslow Metropolis approach that we have started implementing in Izmir correspond to exactly this rightful and important sensitivity of ICLEI. I hope that COP26 will adopt decisions that cover the circular culture concept and its principles that are much needed to combat the climate crisis."

Emphasis on democracy and rights on nature
Mr. Soyer, emphasizing that democracy is one of the most significant innovations of mankind as it was introduced along the Aegean coast where Izmir is headquartered, said, "Democracy is a rationale of values rising over the rule of law and fundamental human rights. However, the world has come to a point where democracy's view of life has to gain a new perspective. And this can only be achieved by developing a horizon that takes nature into its walls. Therefore, we must merge fundamental human rights and the rights of nature. In fact, the core of the rights of nature concept is in the spirit of democracy. But now it is time to put this into words. Human rights are not sufficient on their own. We have to describe the rights of nature in a way that touches all struggles for rights, particularly the climate struggle. If democracy is the harmony in the coexistence of humans, we are now forced to establish the law of a circular culture and harmony with nature."