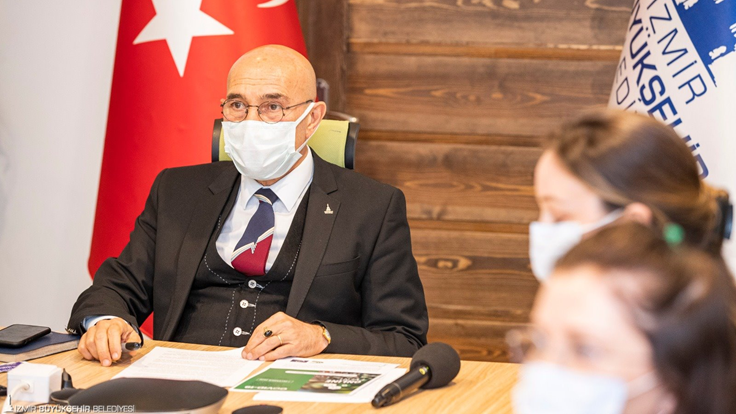 Mayor Soyer explained the active role undertaken by the Metropolitan Municipality of İzmir in fighting against the pandemic and their successful efforts that had an impact on this fight.
There are 17 local politicians in the Presidential Board of the Congress, representing more than 150 thousand local authorities from 47 member states. Tunç Soyer serves as the sole politician selected from Turkey in the Presidential Board of the Congress.

Stating that they achieved an institutional innovation with the epidemic and moved on to a crisis-oriented municipal work, Soyer said, “Within the scope of Crisis-oriented Municipal Work, we first defined new processes for municipal operations and services. Second, we created more participatory decision-making, executive and advisory bodies. Third, we strengthened solidarity throughout the city. At the heart of the Crisis-oriented Municipal Work is the operation of a participation process together with many stakeholders. In this context, we have operated an effective communication network between the municipality, the civil society, the citizens and other public institutions. This provided a rapid flow of information within the city. In this way, financial resources and human resources were allocated effectively for the benefit of citizens, particularly vulnerable communities.”

“We brought everyone together in a digital city square”
Stating that he personally invited all residents of İzmir to social solidarity at the beginning of the pandemic, Soyer said, “We have created a rapid flow of information between the municipality, the citizens, the civil society and other public institutions with the Biz İzmir (Us İzmir) platform, the city square we established in the digital environment, and we ensured that financial and humanitarian aid were delivered effectively. For example, citizens used our on-line platforms to donate food packages to those in need. More than two hundred thousand packages were delivered in total. Citizens volunteered in the preparation and distribution of these packages. Through the Municipality’s Citizen Communication Center (HIM), volunteers and employees of the municipality contacted nearly half a million citizens to respond to their urgent requirements. One thousand and a hundred volunteers signed up to shop for the elderly persons. These are just a few examples of solidarity we have created with the Crisis-oriented Municipal Work model.”

President Soyer said that an İzmir Resilience Action Plan, in which all steps taken for fighting against Covid-19 are detailed, was being developed.