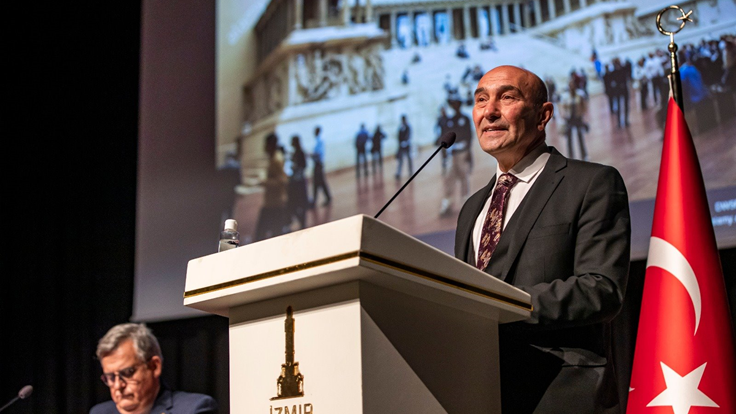 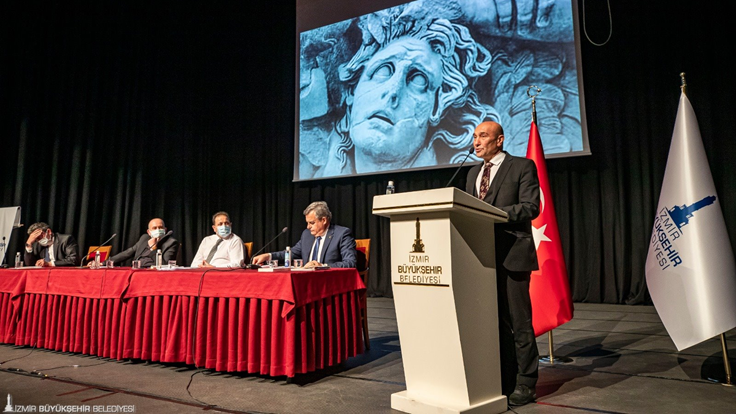 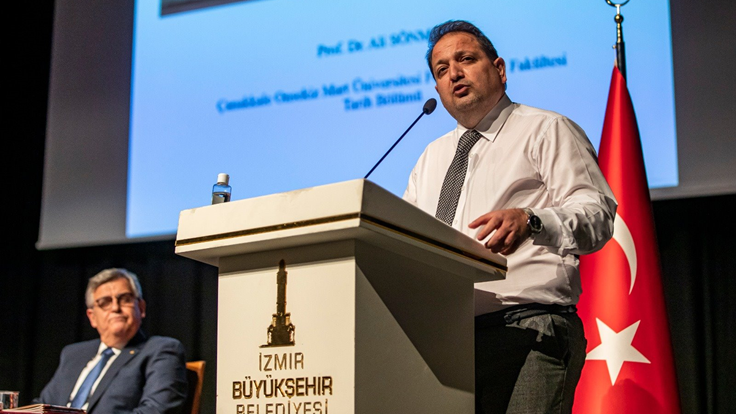 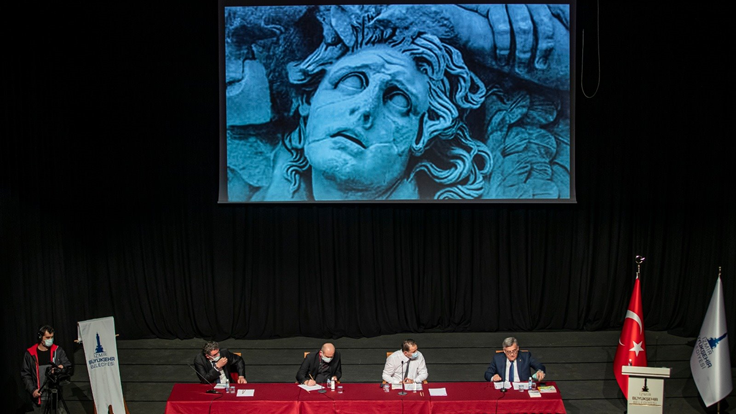 The process was initiated to bring the Temple of Zeus to Bergama, its homeland, whose parts were smuggled to Germany in the 1800s. The road map of the process, which will be carried out jointly by the Ministry of Culture, Izmir Metropolitan Municipality and Bergama Municipality, was prepared in a meeting held in Bergama today.

President Soyer said, "They say the stone is heavy on its own ground. We will bring this artifact back to its homeland and to its roots.”
In addition to Mayor Soyer, Neptün Soyer, Head of Izmir Village Cooperation Union and Mayor Soyer’s wife, Minister of Foreign Affairs İzmir Representative Ambassador Gökçen Kaya, Former Minister of Culture and Tourism Suat Çağlayan, Mayor of Bergama Hakan Koştu, Mayor of Dikili Adil Kırgöz, Former Mayor of Bergama Sefa Taşkın, officials of the Ministry of Culture and Tourism, Izmir’s Provincial Director of Culture and Tourism Murat Karaçanta, NGOs, professional chambers managers, academicians and bureaucrats of Izmir Metropolitan Municipality also attended the meeting.

In his opening speech, Mayor Soyer said that when the deep-rooted legacy of Bergama is told to the whole world, the demand to return the Zeus Temple can be met.
He said, “This is a journey, there will be many legal and political obstacles before us. But continuing this journey will also be an opportunity for Bergama to find the value it deserves and to reveal its potential. We believe this is our deserving cause. This journey itself will be an opportunity to show the world how precious Bergama, this beautiful and ancient geography is. I would like to express my gratitude to all my comrades with whom we will cooperate from now on.”

Mayor Soyer said in the declaration about the roadmap regarding the return of the Zeus Temple, "We will be in coordination with the Ministry of Culture and Tourism, Ministry of Foreign Affairs for this. We know that if we act together, we will get closer to the result. Because this process has a historical and cultural value as well as an importance for the tourism industry.  We will introduce Bergama first at home and then abroad. We want to take a Pergamon Exhibition around the world starting from Europe. We must carry out a work that will enable people to see our righteousness with public pressure. Our path is open, we will bring the Zeus Temple back to these lands”.

Mayor of Bergama Hakan Koştu said, "Bergama, which has hosted many important works of every period from the Hellenistic age to the Ottoman period, has been accepted as a UNESCO World Cultural Heritage. The Temple of Zeus, which has been thousands of kilometers away from its homeland for 140 years, is one of the most important works of antiquity and an invaluable example of the Bergama sculpture school. The Zeus Temple, whose foundation is in Bergama and originally in Berlin, is a unique beauty masterpiece made by the Anatolian people. Our government wants also the same. We will bring the Zeus Temple to Bergama.”

Prof. Dr. Ali Sönmez from Çanakkale 18 Mart University History Department explained the historical process in which the Zeus Temple was taken from Bergama to Germany at the meeting led by Izmir Metropolitan Municipality Council Member Nezih Özuyar. Journalist Ömer Erbil, on the other hand, referring to the fact that this work for the Zeus Temple is supra-party, said, "We do not know what international law will allow, but as people of Bergama, we can make a great campaign. We must tell this to all of Europe. We must tell that the parts of the Zeus Temple were taken to Germany for 9 years. "There is a recommendation of UNESCO saying," Every work is beautiful in its own place."
Özgür İrkin, Director of the Domestic Anti-Smuggling Department of the Ministry of Culture and Tourism, said, "Diplomatic and cultural conditions must mature for the return of artifacts. The return processes of cultural assets can be very long. We can work together with the metropolitan and district municipalities to prevent cultural assets from going abroad.”

The final declaration announced
The final declaration was announced at the end of the Zeus Altar meeting. In this context, it was decided to circulate a Bergama Exhibition in Europe to create a publicity and perception about Bergama, and to start restoration and restitution activities in the places to be determined in Bergama, allocate the Vault and the structure on it to the Zeus Altar Working Group in the historical Pig Area, and to include the definitions expressing the importance of the Zeus Altar in the Bergama/UNESCO 2022-2024 Site Management Plan, which is under preparation, hold the next meeting with experts on the subject, lawyers in order to reinforce the technical details of the legal process.
Izmir Metropolitan Municipality Council unanimously decided in its meeting dated August 12, 2020 to start the works to bring the Altar of Zeus back to its homeland, Bergama.
All News
Previous News
Next News